Menu
FARINATA IN TURIN. STREET FOOD WITH AN ANCIENT ORIGIN.

The legendary dish from Liguria and Tuscany.

THE SEDUCTIVE FLAVOURS OF AN ENDURING TRADITION.

Farinata is a typical dish originating in Liguria and Tuscany. Da Michele has always used the same supplier for their chickpea flour, an ingredient where quality makes a difference. The preparation is also very crucial, it takes experience to not create a clumpy mix as well as to perfectly intuit cooking times.

Shall we continue? First you mix the chickpea flour with water and salt, then allow the batter to rest for a few hours. After that the mix gets poured into tinned copper pans which have been greased and then it gets baked in the wood-fired oven for….nope, we aren’t revealing our cooking times! Rather come and try it for yourself here!

The most widespread legend regarding the origins of chickpea farinata says that it was discovered by accident at the end of the 13th century, during the naval battle Of Meloria between the fleets of the Republics of Genoa and Pisa. The Genoese ships, overwhelmed by a storm, took on sea water which soaked some sacks of chickpea flour stored in the hold and turned them into salty mush. Since food was so scarce at the time, the paste was given to the rowers as rations who, despite their hunger and unrefined palates, were not particularly enthusiastic about the slush. The next day, however, the gruel was unintentionally cooked under the scalding sun which beat down on the ship’s deck, indurating the mix into the delicious yellow pizza which we all now know. Since then, despite their defeat, farinata has also been known as “Pisa Gold“. 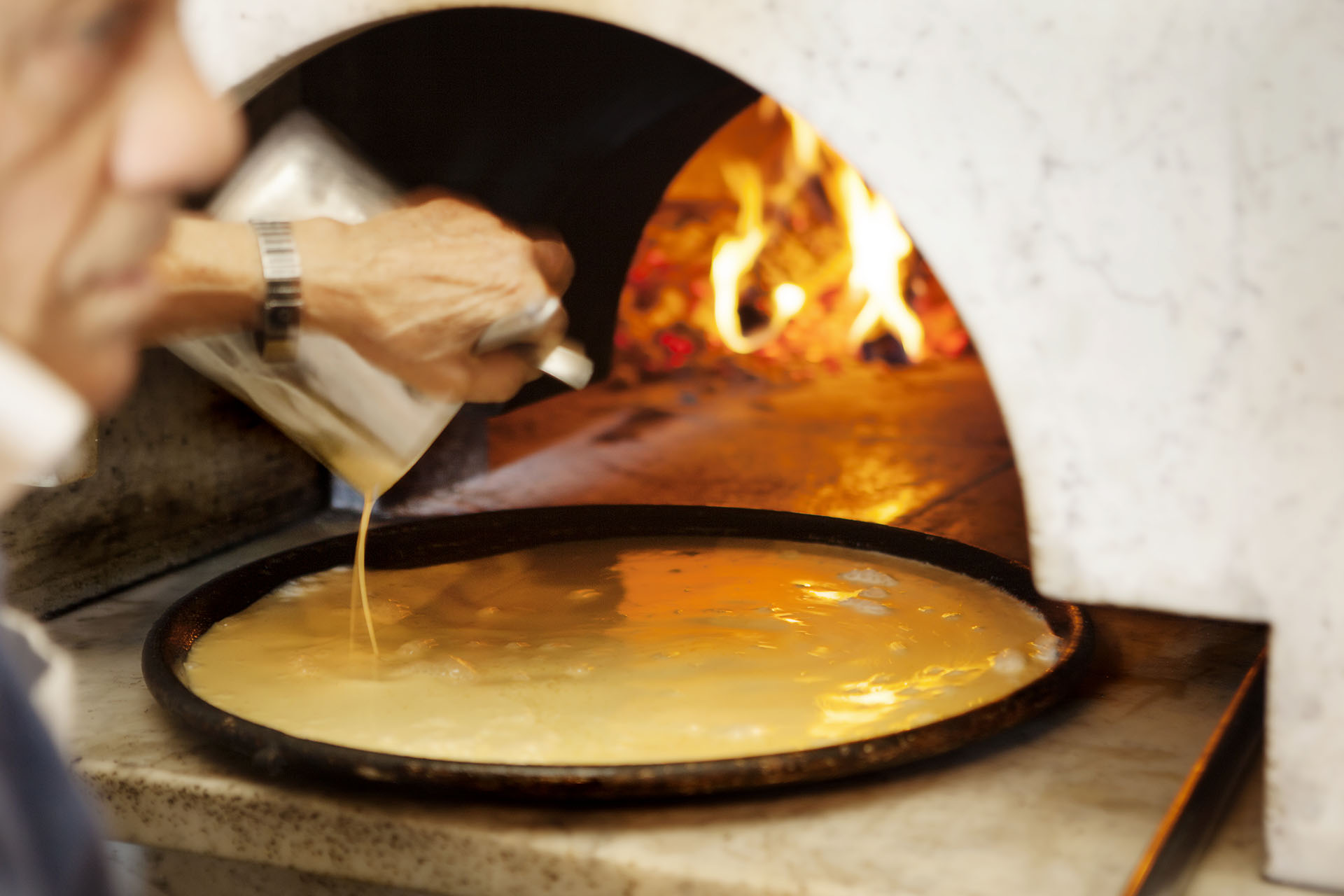 As far back as the middle ages trade between Piedmont and Liguria were very extensive. Through a network of roads knows as the “Vie del Sale” (Salt routes) merchants from the North transported wine, cheese and grain, taking back salt, oil and anchovies. Along these paths farinata became very popular and was known as “belecauda” (nice and hot), in lower Piedmont. Who knows whether in Turin, at the beginning of the 1900s when Michele emigrated from Tuscany, farinata was still known by this name. What is certain is that Michele perfected his recipe, bringing up to an exceptional level. It is simple recipes such as this, made with minimal ingredients, that require special care in making. Michele succeeded in creating a mouthwatering yet delicate product. Thin golden slices, with crispy edges which, for their lightness, were really loved by the workforce of Turin to whom the farinata was delivered by bicycle – the early days of food delivery service. This is the same farinata that can be found today on the tables in Piazza Vittoria in one of the best farinateria / pizzerias in the city centre. A grind of pepper, the enchanting view to the Turin hills and you can rediscover the seductive taste of a dish with a very long tradition.

COME AND TRY SOME OF THE BEST FARINATA IN TURIN

To try farinata prepared to the highest standard call us at +39 011 888836 and book a table outside, in our stunning patio, at one of the best traditional restaurants in Turin.
BOOK NOW